After the completion of the "old hospice" near the Jaffa Gate in 1886/7, in addition to the pilgrims' hospice and a hospital ward, a girls' school for Christian and Muslim girls was also established there under the direction of the Borromean Sisters. A few years later, when Father Wilhelm Schmidt, after whom the school is still named, took over the administrative management (1890), the school developed into one of the best educational institutions in Jerusalem. The Schmidt-Schule was held in high esteem not only by the Christians in the city, but especially by the old Muslim families because of its cosmopolitan educational profile, which was tolerant of religious issues.

During this time, teaching was based on German primary school curricula and German was a main subject only in this Jerusalem school. Father Wilhelm Schmidt, who died in 1907, was succeeded by Father Ernst Schmitz, who continued to set up libraries and expanded them to include the natural science collections, which meant that the equipment at the school was at a relatively high level at the time. Schmitz also managed to set up a teachers' seminar, which moved into the Paulus House, which had opened in 1908. The curriculum was taught by the eight sisters of the Borromean Sisters, and from 1913, Sister Marina Kramm also took over the educational management of the school. After the hospice moved to the new Paulus-Haus at the Damascus Gate, the Schmidt-Schule was able to expand in the old building at the Jaffa Gate and develop further overall.

With the beginning of World War I, the Schmidt-Schule, like all comparable institutions under foreign management, was closed, but thanks to the good relations between Berlin and Constantinople, it was able to resume teaching as early as the beginning of 1915. It was only after the city was taken by the British in 1918 that the school was closed for three years later that year. 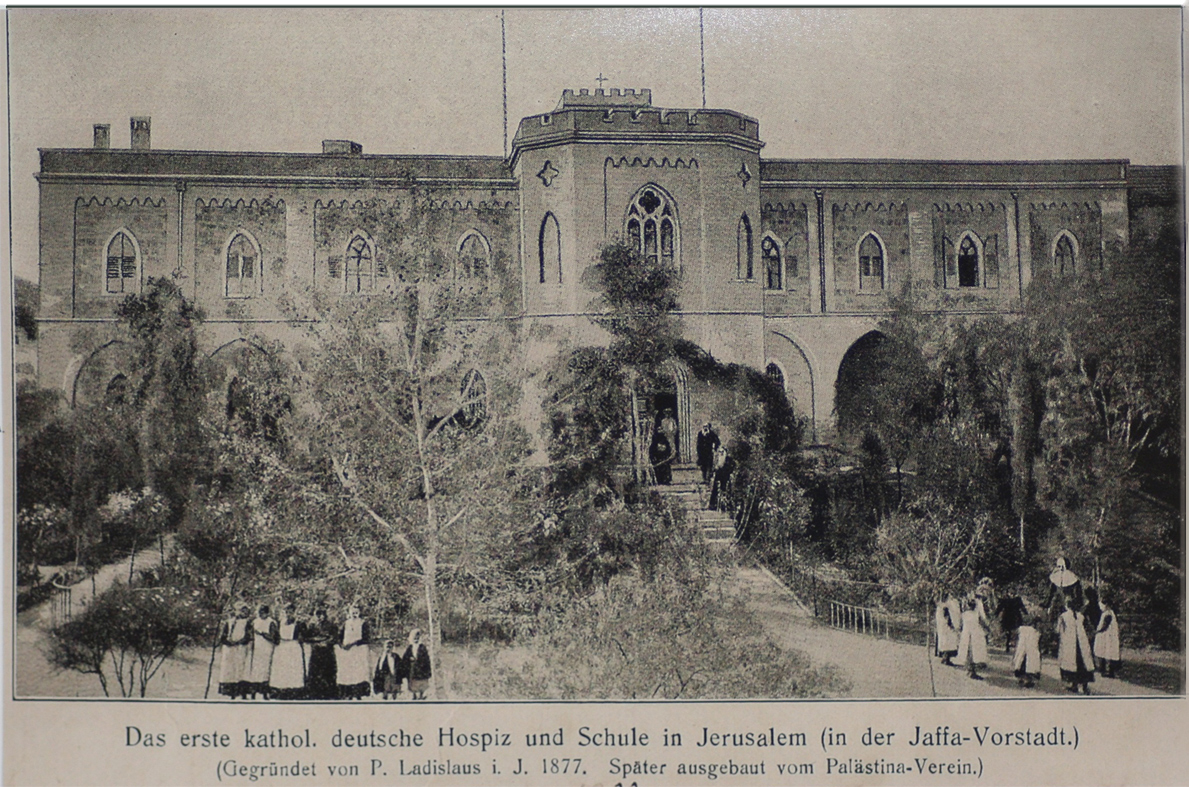 In 1921, the British mandate made the resumption of school operations subject to strict conditions. English should now replace German as the language of teaching (alongside Arabic as the mother tongue of the students). German was only tolerated again as a subject in later years. In 1921, the school started with 27 pupils in two classes and a kindergarten group. In 1936, when the 50th anniversary was celebrated, the number of students had grown to 370 girls. From 1925, the school enjoyed more and more support from church and political authorities in Germany. In the 1930s, German was again a compulsory foreign language for all schoolgirls from grade 6 onwards, and in a German section, German schoolgirls were taught in two classes according to German curricula. Last but not least, the protection of the school by the Latin Patriarchate and the not too close connection to German cultural authorities preserved the school's relative independence during the National Socialist period.

Nevertheless, all those responsible were aware that the school's move into the Paulus-Haus was only meant to be temporary, since the hospice was only suitable as a school building for around 400 pupils to a very limited extent, some of whom were also boarding school pupils.

As early as the 1950s, some outbuildings of the school were built on the grounds of the DVHL, but it was not until 1962 that the construction of the present school building could begin. With the "Six-Day War" which began on 5 June 1967, and the subsequent occupation of East Jerusalem, teaching was initially out of the question, especially as the school building had been badly damaged as a result of the fighting.
The Israeli occupation of East Jerusalem that has continued since then has brought with it numerous changes and new challenges for the Schmidt-Schule. Many Christians left the Holy Land after 1967 as they saw no economic or cultural prospects for themselves and their families in Palestine. Since then, the number of Christian students at the Schmidt-Schule has been steadily decreasing and is currently around 15%. As many state schools reached the limits of their enrolment capacity after 1967, the Schmidt-Schule took in more and more children from the school's immediate neighbourhood, whereupon the social composition of the student body and the families' accompanying educational expectations of the school fundamentally changed. Israel's annexation of East Jerusalem (1980) and Jordan's withdrawal from East Jerusalem (1988) did not make the situation any easier. Which curricula were now decisive in order to achieve which diplomas? Which passports did our students have? In addition, the Borromean Sisters had major problems with young talent.

EVERYDAY SCHOOL LIFE IN THE 1980S

In 1986, the school community celebrated the 100th anniversary of the Schmidt-Schule. Many schoolgirls started at the Schmidt-Schule in kindergarten or preschool and then attended the six-year primary school. This is followed by three years of secondary school, which ended with a middle school diploma according to Jordanian curricula. From grade 10 onwards, the students could choose either the Arabic Tawjihi or an international diploma, the English G.C.E. during the three-year upper school. Many graduates from this period became the best of their class in the universities of Palestine. It is said to have occurred more frequently that with around 15,000 university graduates per year, five of the ten best female students were "Schmidt Girls".  German was still a compulsory foreign language. Many students completed their German language classes with a Goethe certificate.

After the Borromean Sisters, the Maria Ward Sisters / Congregatio Jesu, an internationally very successful school order, agreed to take over the school's sponsorship. The matron at Paulus-Haus and Ms Ellen Kashram were now leading the school through very difficult political times. The "First Intifada", the "War of the Stones", had already begun in 1987 and only ended in 1993 with the creation of the Palestinian Authority. Seven years later, the "Al Aqsa Intifada" began, which was officially ended after five years in February 2005 with a bilateral ceasefire. At the same time, a barrier wall has since separated the West Bank from East Jerusalem, which meant that it has not always been possible for quite a few pupils and teachers to come to school regularly.

Only after the end of the second Intifada did the DVHL seem to have the opportunity to promote the school more strongly again. In addition, an important partner was now found in the "Central Office for German Schools Abroad" (Zentralstelle für das Auslandsschulwesen) who was able to avert the closure of a traditional school by converting the school into a German school abroad. In 2008, the Schmidt-Schule was officially included in the selection of German schools abroad.

Despite many renovations, the existing school building was not sufficient to accommodate a kindergarten, pre-school and a dual-track school for grades 1-12. In 2011, therefore, a cooperation agreement was concluded with the Borromean Sisters in St. Charles, which stipulated that the kindergarten and pre-school will again be run by the Borromean Sisters in West Jerusalem, while classes in the Schmidt- Schule in East Jerusalem will only begin with grade 1 of the primary school.

Parallel to these structural decisions, the DVHL decided, in view of the now clearly regulated responsibilities and objectives, to give the Schmidt-Schule more support again with regard to the modernisation of the buildings. The grants from the Israeli Ministry of Education, the inclusion in the federal school grant (2012) and private donations are the essential financial and organisational prerequisites for the Schmidt- Schule to again be one of the most important international girls' schools in Jerusalem.